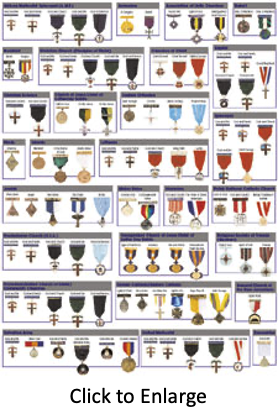 The pendants or emblems are awarded by related religious organizations.  They are not a Scouting recognition.  Each faith has its own requirements for earning its emblem; most call for religious knowledge and service.  Since Scouting is nonsectarian, it espouses no creed and favors no faith over another.  Instead, it provides programs and ideals that complement the goals of all religions.  More than 47 percent of all Scouting units are chartered to religious organizations.

One unique development that has emerged from the partnership of Scouting with religious organizations is the religious emblems program.

The following religions have programs, and additional information can be found here at Scouting.org.

Youth Religious Emblem – This knot may be worn by any Scout or Scouter who completed the religious emblem program as a youth member.  The actual administration of religious emblem programs is conducted by the Scout’s religious organization.  The organization then presents the religious emblem upon completion of the program.  Units frequently award the recipient with a presentation of the Universal Religious Emblem Square Knot.  Only one youth award square knot is worn, no matter how many times the holder earns a second or subsequent religious award as a youth member.  For subsequent awards, the Scout wears the appropriate devices on his square knot to indicate multiple awards.

Adult Religious Award – This square knot is worn by those who have received a religious award as an adult member of the BSA.  It is not a BSA award, and is presented by religious organizations for long tenure of service to Scouting, the religion, and the community.  Only one adult award square knot is worn regardless of how many awards are received.

Adult awards are not earned like youth awards: Generally, an outside party must nominate an adult to receive an award by submitting the required applications, letter of recommendation, and resume of activities. Self and spouse nominations will not be accepted, and nominations cannot be made posthumously.

Information from the BSA

Diocese of Peoria Committee on Scouting

Baden-Powell stated, “No man is much good unless he believes in God and obeys His laws. So every Scout should have a religion….Religion seems a very simple thing: First: Love and Serve God. Second: Love and serve your neighbor.”  (Scouting For Boys, 1908)

Religious Emblems Coordinator (REC) positions exist at the Council, District and Unit levels. The REC’s are responsible for educating, motivating, evaluating, and expanding the usage of the religious emblems programs. Contact the WD Boyce Council Service Center if you are interested in becoming involved as an REC.

Purpose of the REC: